Nigeria forward Alex Iwobi was in fine form as Pierre-Emerick Aubameyang scored a goal on his English Premier League debut for Arsenal, who annihilated Everton 5-1 at the Emirates on Saturday evening.

It was a terrific response to their 3-1 shock loss to Swansea in midweek.

Aaron Ramsey also bagged a hat-trick and Laurent Koscielny also got on the score sheet for the Gunners who were dominant for throughout the game.

It was the second time the Gunners were scoring five goals past Everton this season. Iwobi who made his 16th EPL appearance provided an assist for the Gunners’ third goal.

The win helped Arsenal reduce their eight-point gap off the top four to five while Everton are without a win in their last 12 visits to the Emirates, losing eight and drawing four games.

It took six minutes for Arsenal to break the deadlock with Ramsey finishing off a lovely build-up play from the right flank.

Ramsey was on the score sheet again in the 19th minute when he fired in Iwobi’s pass. The shot was deflected in for Arsenal’s third goal in the first half.

Aubameyang made it four in the 37th minute after the Gabonese striker, who was offside, raced on to Henrikh Mkhitaryan’s pass to dink the onrushing Jordan Pickford. There was no flag, so the goal stood. 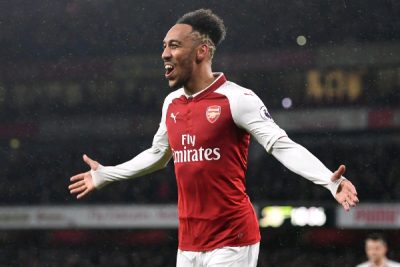 At the start of the second half, Everton manager, Sam Allardyce took off Michael Keane for Tom Davies, with the Toffees switching to a four at the back from three man defence deployed at the start of the game.

Everton came close to scoring with Oumar Niasse proddling the ball against the upright.

Ramsey completed his hat-trick, firing cut back pass from Mkhitaryan to make it 5-1 in the 74th minute. It was the first hat-trick in Ramsey’s career.

Arsenal face Tottenham Hotspur in a North London derby at the Wembley Stadium in their next EPL game.