By Johnny Edward:
Super Eagles coach, Gernot Rohr, haa been been fielding questions from the oress to address some knotty issues about his team following their qualification for the 2019 Africa Cup of Nations in Cameroon with a game in hand in the qualifiers, Completesportssportsigeria.com can now serve you the details.

Rohr insists there is no chance of the Three-time African champions dialing down their own intensity when they host Seychelles in their final Group E clash next year.

The Super Eagles are already through to the group stages of the 2019 AFCON in Cameroon with a game to spare, but a win in their final group game against Seychelles will see the Super Eagles automatically clinch the top spot. 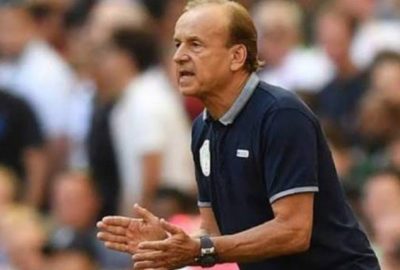 Nigeria lead Group E with 10 points from five games and are followed closely by South Africa on nine points, while Libya are third with seven points. Seychelles are at the bottom of the group with just one point.

“We don’t just want to qualify for the AFCON, we want to finish top of our league (table). We need to win against Seychelles to achieve that, ” Rohr said during a breakfast media parley with Nigerian sports editors on Friday.

“We still have a lot of work to do. We’ve really improved from the point I took over the Super Eagles. The joy to play good football, defend and score goals has now improved. We make fewer mistakes now as a team.”

Rohr shrugs off talks about captain John Obi Mikel retiring from the Super Eagles after the 2018 FIFA World Cup in Russia.

The 30-year-old has missed the Super Eagles last five games against Seychelles, Libya (home and away), South Africa and Uganda fueling talks about his retirement from the national team after 13 years.

“That (Samuel) Chukwueze wore the number 10 jersey against Uganda doesn’t translate to being a replacement for Mikel. It’s just a jersey number he used,” Rohr explained.

“Mikel remains in our plans and we all know why he has been out of the team. Mikel Obi will decide if he wants to play at AFCON 2019. He was omitted because of fitness issues, but we will look at his performance before the tournament.

“After the FIFA World Cup in Russia Obi Mikel wanted to take a break. He told me he needed rest and motivation. When he is ready, he will be back. Mikel is a fantastic captain.”

Rohr also explains why Samuel Kalu was his first ahead of Moses Simon in Super Eagles’ recent matches.

“I know Kalu Samuel very well. We had a similar player in Simon Moses, but who wasn’t in such a good physical condition. Kalu is good going forward & also a good defender, so we needed to play him in that role.”

On Victor Moses’ retirement from the Super Eagles, Rohr explains that he tried to convince the 27-year old to do a rethink ofbhis decision, but the Chelsea winger wanted to focus on his club career.

“I hope he will get an opportunity to play in Chelsea or with another club,” Rohr said of Moses’ situation at the Stamford Bridge.

The Eagles boss reveals he will be willing to work again with Salisu Yusuf after his suspension over a bribery case, but adds that the decision depends on the top hierarchy at the Nigeria Football Federation.

“If the NFF recalls Coach Salisu Yusuf to the Super Eagles, I will work with him. I have a good personal relationship with him. He made an honest mistake and I think he has paid for his mistakes. There is no reason why he should not be given another chance, but that decision depends on our bosses at the NFF,” he remarked.

Rohr expresses his wish to have the home-based players featuring prominently in the Super Eagles, but notes that they need good infrastructure to play on in order to develop better and stand good chances of playing regularly for the national team.

“We have already called up a lot of local players, but many of them end up going to Europe. Sometimes I feel like agents just want to bring them to the national team to make it easier to sell them,” he stated.

“I love local players. I want players in the Nigeria Professional Football League to play in the Super Eagles, but these local players need good infrastructure to play.

“We’ve invited 20 local players to Super Eagles since I became a coach. Buts it’s difficult to invite them because they don’t play often and Nigerian clubs don’t have the infrastructure.”

The Franco-German tactician also weighs in on the Nigeria’s disallowed goals against South Africa in last Saturday’s 2019 Africa Cup of Nations qualifier stating that it was difficult for the referee to make the right calls due to the pace of Ahmed Musa.

“Referees are humans and it is very important to understand that the job is difficult. The referees don’t like to be attacked because if you do the next time they refer your game, it may be difficult for you, let’s not criticize them too much.

“I’m a referee at each training session of my team and so I know it’s quite a difficult job to do.

“I saw the offside goals after the game. I didn’t criticize the linesmen. When you have quick players like Ahmed Musa, it’s really difficult to keep up and that is why we need to introduce technology in Africa.

“It is very difficult for referees. Gassama did well. It was not his fault.”

He also explains the inclusion of the inactive Ikechukwu Ezenwa and Hapoel Beer Sheva midfielder, John Ogu in his squad for recent games.

“It’s always good to have a player like Ezenwa in the team whether he’s playing or not because he has the right spirit. Always positive, praying. Same with Ogu,” Rohr stated.